Philadelphia, the "City of Brotherly Love" and the "Birthplace of Independence" has a long, storied history and is home to many infamously reputed haunted locations.

Places like Eastern State Penitentiary, Fort Mifflin, and even the Betsy Ross House are historical landmarks that have been featured prominently in paranormal programs, magazines, etc. Much less well known (even to locals) is Library Hall, on 5th Street just east of Independence Hall. Home of the American Philosophical, the specters of this locale have long been linked to none other than Benjamin Franklin.

Franklin's mischievous ghost has been said to wander the rows of the library within, often with a stack of books tucked under one arm and is walking cane in the other.

Much more curious (and downright humorous) are the reports of the statue of Franklin that stands in a cove carved above the 5th Street entrance to the building. Numerous reports over the years have claimed that the statue moves, the head sometimes turning to follow those walking down 5th or the arms swinging about.

There is also local lore - believe it or not - about the statue leaping down into the street and dancing (!) at the stroke of midnight during a full moon phase.

That last one is tough to reconcile, but there are enough people who have reported this occurrence to suggest that the possibility has merit.

So... what do you think? Have you ever explored this location, or are you a Philadelphia local with more information on what may (or may not) be going on here?

We'd love to hear more about this location and the mysterious happenings around the Franklin statue...
at 11:08 AM 1 comments 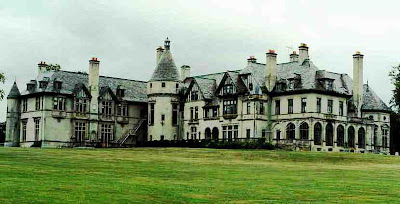 Tonight's episode of Ghost Hunters (9 p.m. on Syfy) will feature an investigation of Carey Mansion in Newport, Rhode Island.

The sprawling estate, originally known as SeaView Terrace, is perhaps best known from the television series Dark Shadows (1966-71), which used its exterior as the fictional Collinwood Mansion.

Completed in 1928, the massive Frech Renaissance chateau is regarded as the last of the great "Summer Cottages" and is the fifth largest of Newport's famous mansions.

I am very interested in tonight's investigation, as I am not aware of any specific claims as to paranormal activity at this location. Given it's long history, shear size, and seaside location, I am certain there are many stories.

Are you familiar with SeaView Terrace, or have you perhaps ever toured or investigated the mansion?

Video sneak peak of the Ghost Hunters season premiere, which will air tomorrow night on Syfy. Will you be watching? If so, what locations and investigations are you looking forward to seeing (or which ones would you like to see) this year? Just a little harmless fun on a lazy Sunday afternoon...

This is comedian Chris Elliott's spoof of "Ghost Hunters" (even though the YouTube description says "Ghostbusters"), as seen on the Late Show with David Letterman in late 2006.

Pretty funny stuff. Honestly, we have no idea why CBS didn't pick this show up. They really missed the boat on this one...   ;)

According to WVLA in Baton Rouge, Louisiana, a deer hunter claims he captured this image wandering through the wilderness in nearby Berwick on his stand camera.

The hunter reported that the camera was broken when he came to retrieve it, but the strange image was saved to its memory card. 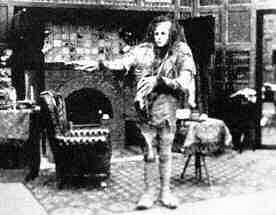 The very first film adaptation of Mary Shelley's Frankenstein is celebrating its 100th anniversary this year. Shot in 1910 at Edison Studios in Brooklyn, the unbilled cast included Augustus Phillips as Dr. Frankenstein, Charles Ogle as the Monster, and Mary Fuller as the doctor's fiancée.

Shot over a span of three days, the film is just a little over 12 minutes long. It is in the public domain and is available in its entirety on YouTube...

Two things struck us while watching this short film. One, was that this must have terrified moviegoers upon its release; though tame by today's standards, it had few (if any) parallels back in 1910.

Also, it is amazing to think how far movie-making technology would come over the next two decades. See the trailer for the Universal's classic 1931 version of Frankenstein for proof...

There are plenty of horror-themed movies being shown on TV this time of year, especially with Halloween just two weekends away. What is your favorite?

Whether you're a fan of the "classic monster" flicks that includes Count Dracula, Frankenstein, and the Wolfman, or more a inclined to enjoy the slasher films featuring the likes of Michael Myers, Freddie Kruger, and Jason Voorhees, the roots of the genre can be attributed to one landmark production...

Nosferatu, F.W. Murnau's 1922 silent film masterpiece set the bar for all to come. Here is the film, now in the public domain, in its entirety...

Should paranormal investigators be required to get "certified?"

What is your favorite paranormal-related TV show?